DDoS attacks are rising so much that for the first time in history, in fact, the annual number of observed DDoS attacks crossed the 10 million attack threshold, with NETSCOUT’s ATLAS® Security Engineering and Response Team (ASERT) seeing 10,089,687 attacks over the course of 2020. Furthermore, as the pandemic lockdown took effect last spring, cybercriminals launched 929,000 DDoS attacks in May, the single largest number of monthly attacks we’ve ever seen.

These increases in DDoS attacks have impacted how Internet Service Providers (ISP) think about DDoS and how they can assist their customers plus collaborate with other ISPs both upstream and downstream in mitigation efforts since they are closer to the source of the attacks and see the traffic first.

Plans such as ‘Flowspec Peering’ between tier-1 US operators, and the Internet Engineering Task Force’s (IETF) DDoS Open Threat Signaling (DOTS) program attempted to develop collaboration programs that require installing provisioned infrastructure or sharing attack data to a central database. These programs uncovered the reluctance in the industry to install infrastructure or share data. Most of the reluctance came from the executive suite based on the business decisions. Initiatives like this though, demonstrate that the whole industry wants to fight DDoS together.

Dealing with this level of attack should not fall on the backs of the ISPs alone but requires collaboration among all stakeholders in the battle against DDoS attacks. NETSCOUT® has been a trailblazer in efforts to coordinate DDoS protection and collaboration within our customer ecosystem. For over 20 years, NETSCOUT’s Arbor DDoS defense products have been deployed in a majority of the world’s ISPs and many enterprise networks. Arbor DDoS protection products enable collaboration amongst ISPs and their customers to fight the global threat of DDoS attacks together. This collaboration falls into three categories.

To assist with attack collaboration among ISPs, NETSCOUT’s Sentinel provides a unique, fully integrated, internetwork-signaling mechanism called Sightline Signaling, which allows network operators to share attack attributes and coordinate defenses spanning network boundaries ultimately enabling their peers to collaborate at an unprecedented level to collectively stop DDoS attacks nearer their source. Our Sightline Signaling feature in Sentinel provides the similar capabilities to the risky and clunky Flowspec peering efforts but in a safe, automated way. One ISP may see DDoS traffic that is attacking their network customers but originates or passes through an upstream ISP. They can then signal the upstream ISP through Sentinel to alert them that the identified attack traffic is coming through their network while providing attack details and attack countermeasures.

To assist with Customer-to-ISP collaboration, NETSCOUT’s Arbor Edge DefenseTM (AED), which is deployed on the customer premises, provides a Cloud Signaling feature so customers can share attack attributes with their upstream ISPs. The upstream providers can use the identified attack attributes to create countermeasures within their systems and further share those countermeasures with their peers. The Cloud Signaling feature can also coordinate collaboration from the on premises AED with cloud DDoS services to knock down volumetric attacks closer to their source.

To help feed the ecosystem and the DDoS defense community as a whole, both Sightline and AED deployments send anonymous attack stats back to NETSCOUT’s ASERT and ATLAS (Active Threat Level Analysis System), providing information about observed DDoS attacks and other forms of cyber threats experienced by these organizations. No one has the global-threat-intelligence presence that NETSCOUT employs to provide awareness for our customers and the DDoS protection community as a whole. This awareness is generated through Omnis Threat Horizon, Threat Reports, Blog Posts, Threat Advisories and a continuous feed of Threat Intelligence that arms all Arbor DDoS protection products. 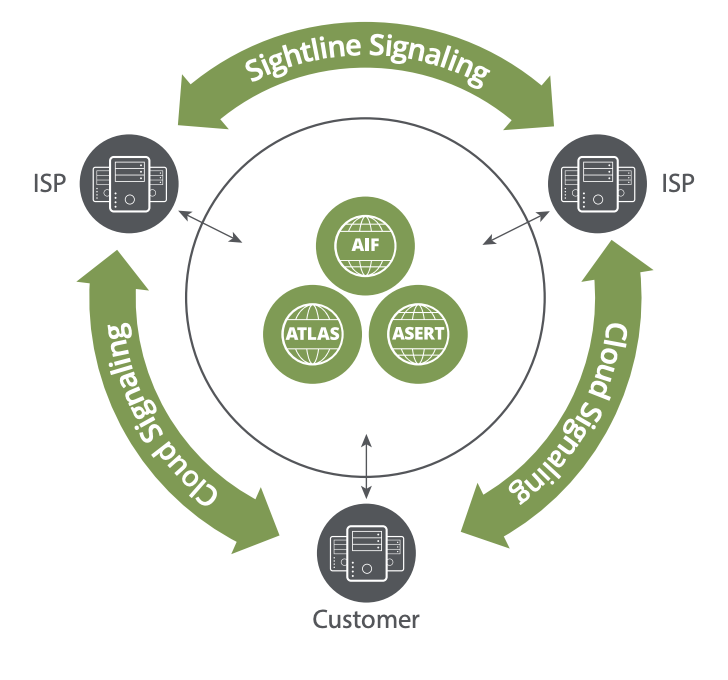 As the global DDoS threat landscape grows and attacks become more frequent and complex, worldwide network operators, their peers and their customers have to adapt to meet the new requirements for identification and mitigation of these new attacks. Collaboration between all of the Internet entities looking for protection against these global attacks is the key to this adaptation.