Pandemic Life Online: What Is Everybody Doing?

Part 2 of our two-part series examining the effect of the COVID-19 pandemic on internet traffic.

In Part 1 of this series, we saw just how much the COVID-19 pandemic has changed our lives by examining a global common denominator: internet traffic patterns. The main takeaway? We are living largely online, as evidenced by significant growth in internet traffic worldwide.

The next logical question is, “Just what is everybody doing with their online time?” After all, this unprecedented shift to remote work and learning changes internet usage not only for work, but also from a personal perspective.

Remote Work: VPN and Video Save the Day

Virtual private network (VPN) technology is crucial for giving remote workers access to corporate resources, as you can see in the chart below from a US-based internet service provider (ISP). That striking pattern of work-week peaks and weekend valleys is consistent with data from throughout the US and the rest of the world. For example, multiple US ISPs reported an increase in VPN traffic of between 60 and 90 percent. The notable drop-off on weekend use makes it pretty clear that this traffic is due to work/learn-from-home activity.

% Increase in VPN Traffic (a US ISP)

This same traffic phenomenon occurs worldwide. For example, in Latin America, one ISP saw a 220 percent increase in VPN traffic (see chart below), while an ISP in EMEA reported that VPN traffic rose by 67 percent. 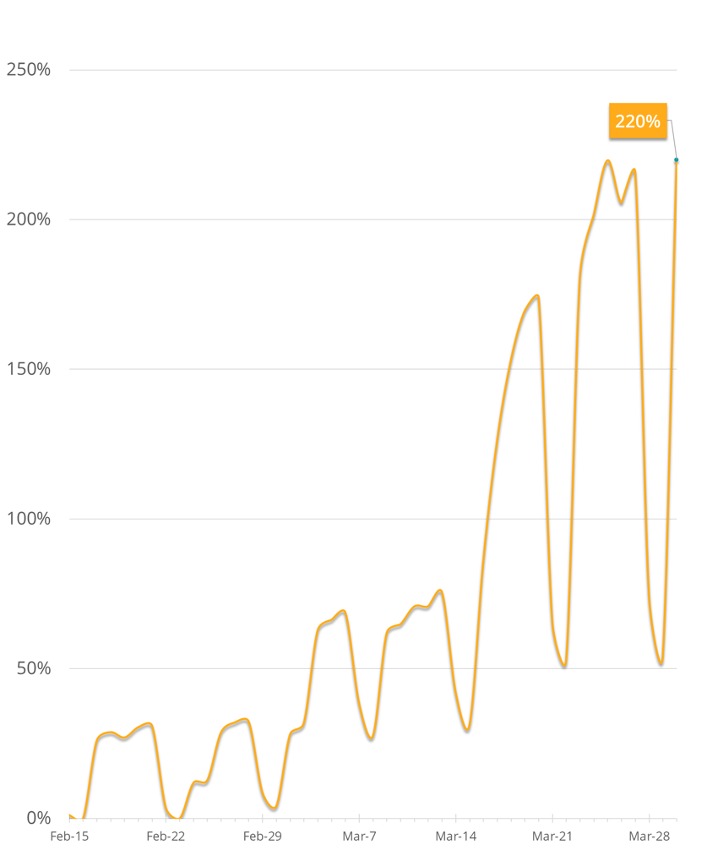 Unsurprisingly, we also saw a jump in the use of video conferencing, another mainstay of the remote-work warrior. The chart below, from a US-based ISP, shows a whopping increase of between 1,000 and 5,000 percent in video conferencing traffic—somewhat staggering numbers, but pretty representative of what we saw from other US-based ISPs.

The usage pattern initially follows that of VPN traffic, with the weekend drop-offs indicating that it's mainly for business. But we then see an increase on weekends after the lockdown in mid-March, most likely due to personal video communication. Notice the slight drop off in late April weekday/weekend traffic. Does this mean we’re all getting a little tired of video conferencing?

% Increase in Video Conferencing Traffic (a US ISP)

Again, we witnessed the same traffic patterns in other parts of the world. One Latin America-based ISP experienced an increase of more than 11,000 percent (see chart below). Voice over IP (VoIP) traffic, which is often used during video conferencing, also saw traffic growth. One EMEA-based ISP indicated a 66 percent increase in such traffic, while an ISP in Japan told us that “since April 1, 2020, conference bridge traffic has increased around 800 percent from the norm. 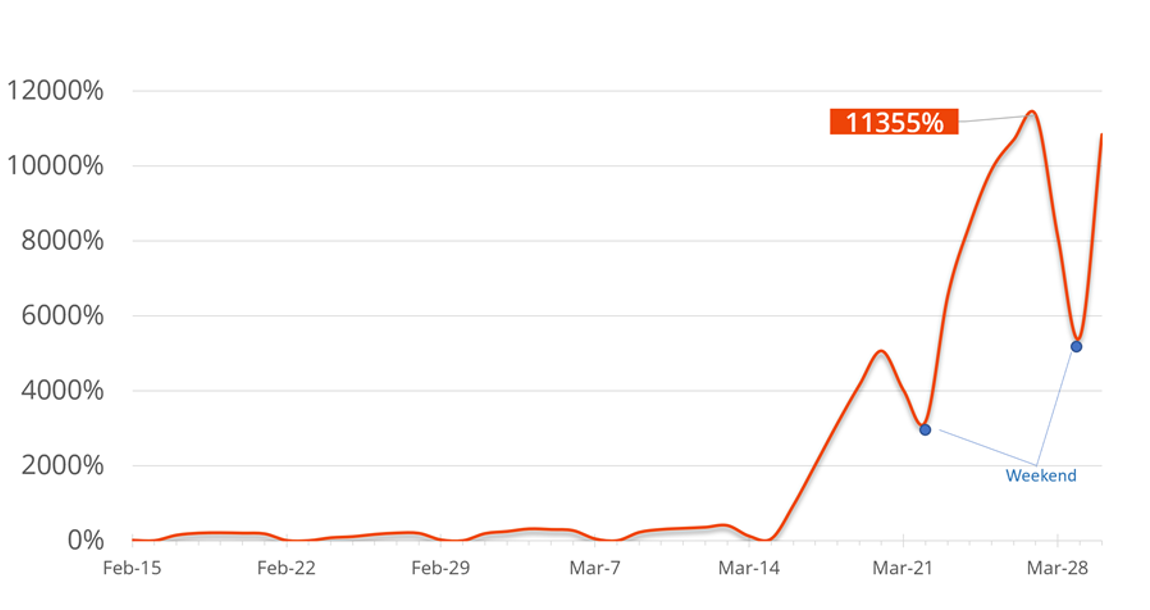 We also explored what the traffic patterns reveal about things people are doing for fun. We’ll begin with the obvious: video streaming (AKA binge watching TV shows on a massive scale).

The chart below, from a US-based ISP, clearly shows the traffic increase, which peaks at 60 percent. People seemed more interested in weekday watch parties; traffic dropped on weekends. We also see a downward trend occurring in April. Is the April drop-off indicative of too much binge-watching? Or is the combination of spring weather and cabin fever driving people to the great outdoors?

% Increase in Video Streaming Traffic (a US ISP)

Again, this pattern repeats itself elsewhere in the world, with some slight variations. For example, the chart below is from Latin America, showing traffic peaking on weekends rather than during the work week. We also note a drop in traffic around March 14. We attribute this to Latin American governments and ISPs requesting streaming providers to change their content from high definition to standard definition to reduce network bandwidth. Alas, this was a temporary fix; consumption of this content continued to increase, dramatically peaking at 98 percent above the norm. Elsewhere around the world, a Japanese ISP reported a 250 percent increase in streaming traffic, including a popular in-country content provider. The Japanese ISP also reported a temporary drop-off in traffic, which it attributed to the reduction in video resolution from content providers. 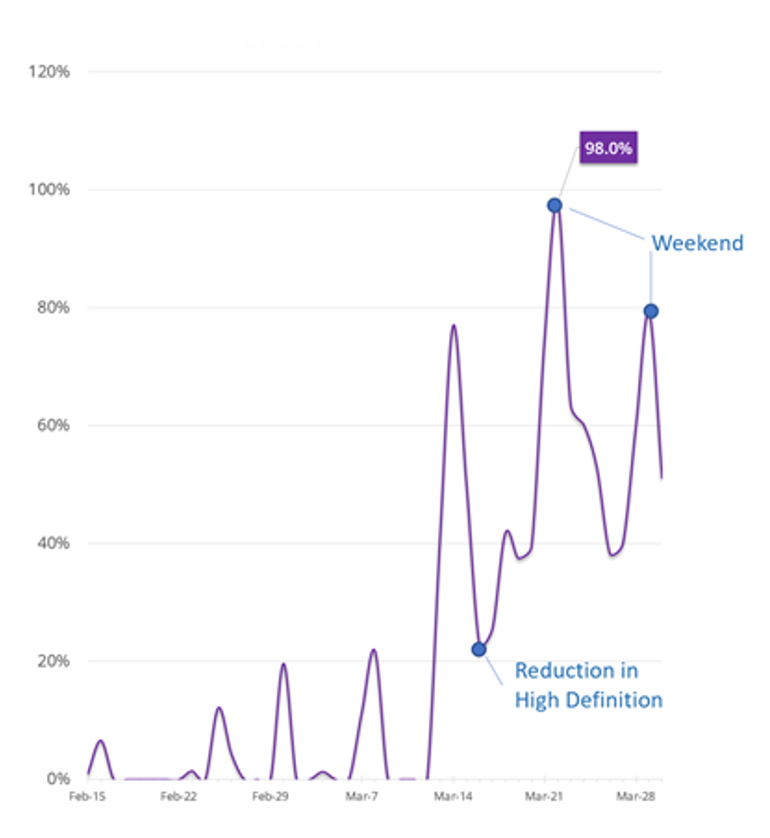 While streaming video saw dramatic growth, people at least took breaks. That does not seem to be the case with online gaming—a perennial favorite, particularly for younger folks. Below is one US ISP’s perspective on the increase in gaming traffic. It’s interesting to note that unlike with other traffic patterns we have shown thus far, gamers do not appear to differentiate between weekdays and weekends. The gaming traffic just continues to increase regardless.

This pattern shows up consistently worldwide, as indicated by an ISP in Latin America, where traffic from gaming services topped out at 295 percent above the norm. Meanwhile one European ISP reported an increase of between 10 and 20 percent in total traffic, mainly related to gaming and video streaming.

% Increase in Gaming Traffic (a US ISP) 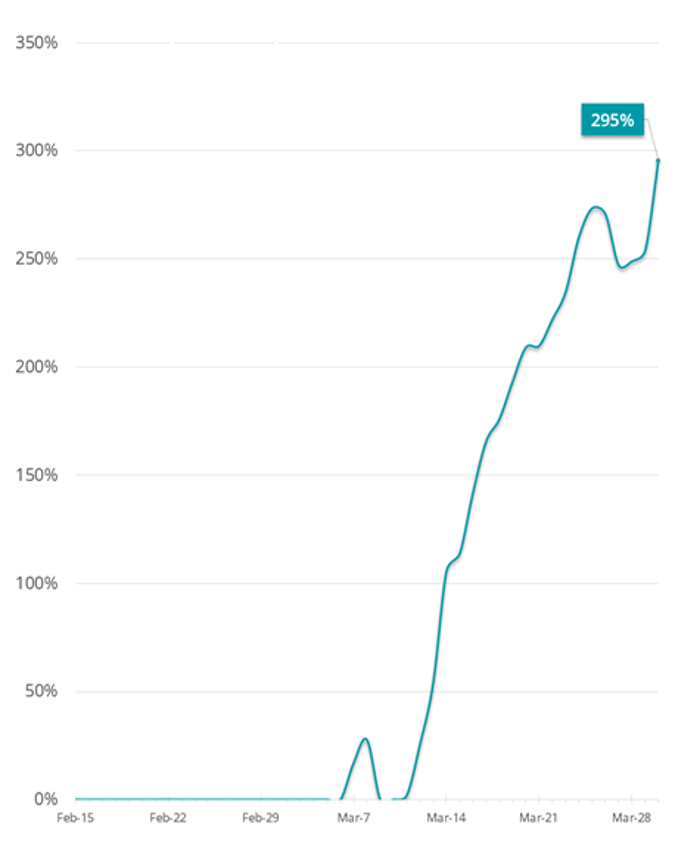 Finally, we wanted to look at how people supported friends and family in hard-hit regions of the world, such as Italy. Judging by the charts below, the internet was crucial to showing support to these folks. The first chart, from a US-based ISP, shows consistent growth in traffic to and from Italy, while the second chart, from a Latin American ISP, shows even more dramatic growth compared with traffic growth between other countries.

% Increase in Total Traffic to/from Italy (a US ISP) 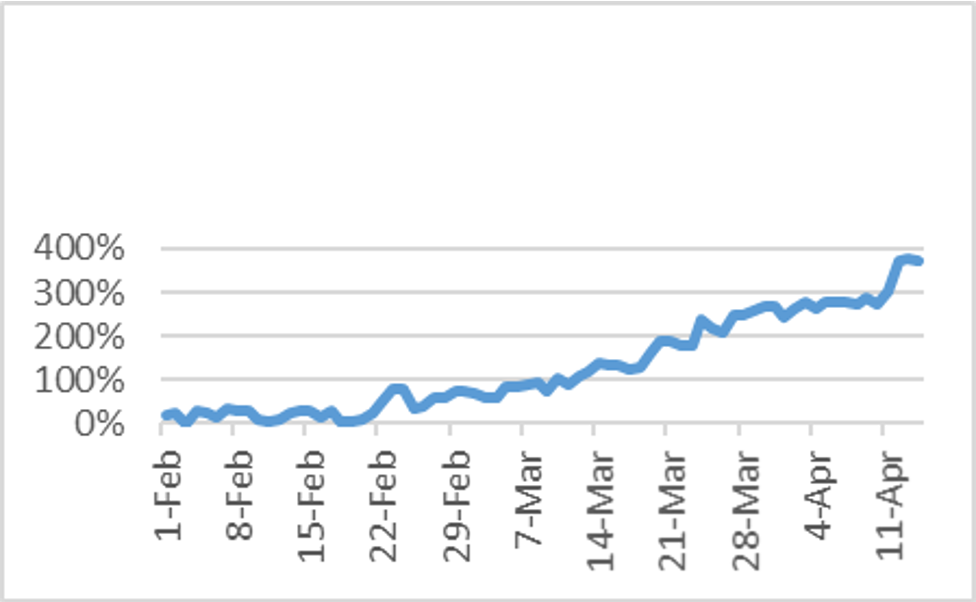 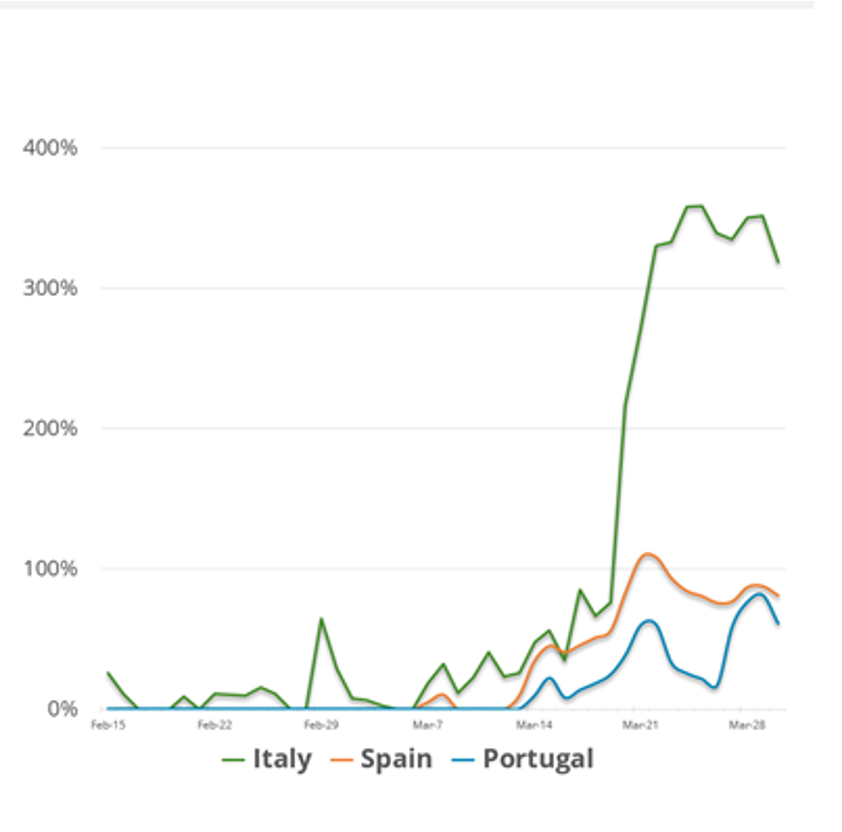 It’s no surprise that COVID-19 has fundamentally changed the way we work and live, but it’s fascinating to see those changes so starkly laid out. It’s a testament to how hard the ISPs of the world have worked that we can rely on this connectivity to maintain some semblance of ordinary life and business continuity. Moreover, ISPs successfully managed this massive increase in legitimate network traffic while simultaneously battling unprecedented increases in DDoS attacks.

As our ASERT team noted, we observed more than 864,000 DDoS attacks between March 11 and April 11 this year—the largest number of attacks we've seen over any other 31-day period, and a 17 percent increase over the previous peak for an equivalent interval.

Here’s another way to look at it. As the table below indicates, the number of DDoS attacks rose monthly during the midst of the pandemic period.

Truly, ISPs have risen to the occasion, providing crucial connectivity around the globe under unthinkable circumstances.

For more detailed information on DDoS attacks during the COVID-19 pandemic, read our blog Measuring the Cruelest Month.

You can also see a real-time and historical view into worldwide DDoS attack activity by visiting NETSCOUT's Cyber Threat Horizon.

Bienkowski is a director of product marketing at NETSCOUT.

COVID-19 Network Traffic Patterns: A Worldwide Perspective from Our Customers