COVID-19 Network Traffic Patterns: A Worldwide Perspective from Our Customers

The COVID-19 pandemic has caused an unprecedented global shift to remote work and online learning, and that massive adjustment has been reflected in a commensurate change in internet usage patterns. Just what do the new traffic patterns look like? To find out, we asked several NETSCOUT Arbor Sightline customers to share data from their deployment of remote work policies. This is what we found out.

The chart below is indicative of the worldwide traffic patterns related to the COVID-19 pandemic. 1-Feb represents the average pre-pandemic traffic volume from December 1, 2019, to February 1, 2020. From there, we can track the increase in traffic volume as companies and governments implemented worldwide self-quarantine and work-from-home policies. The turning point is pretty stark: the chart shows a major jump in mid-March, when the majority of the world shifted to remote work. We estimate that this resulted in an instant 25 to 35 percent increase in internet traffic.

You may be thinking that a 25 to 35 percent jump is not that much, but keep a few things in mind. First, this is an approximate worldwide average from the data we have received. Second, in some cases these percent increases were on networks running at tens to even hundreds of terabits per second. And last, the average was impacted by variations in traffic growth across internet service providers (ISPs)—likely a reflection of geographic variations in pandemic impact.

Let’s start by taking a look at data from multiple ISPs in the US, where we saw an average traffic increase of approximately 25 percent. 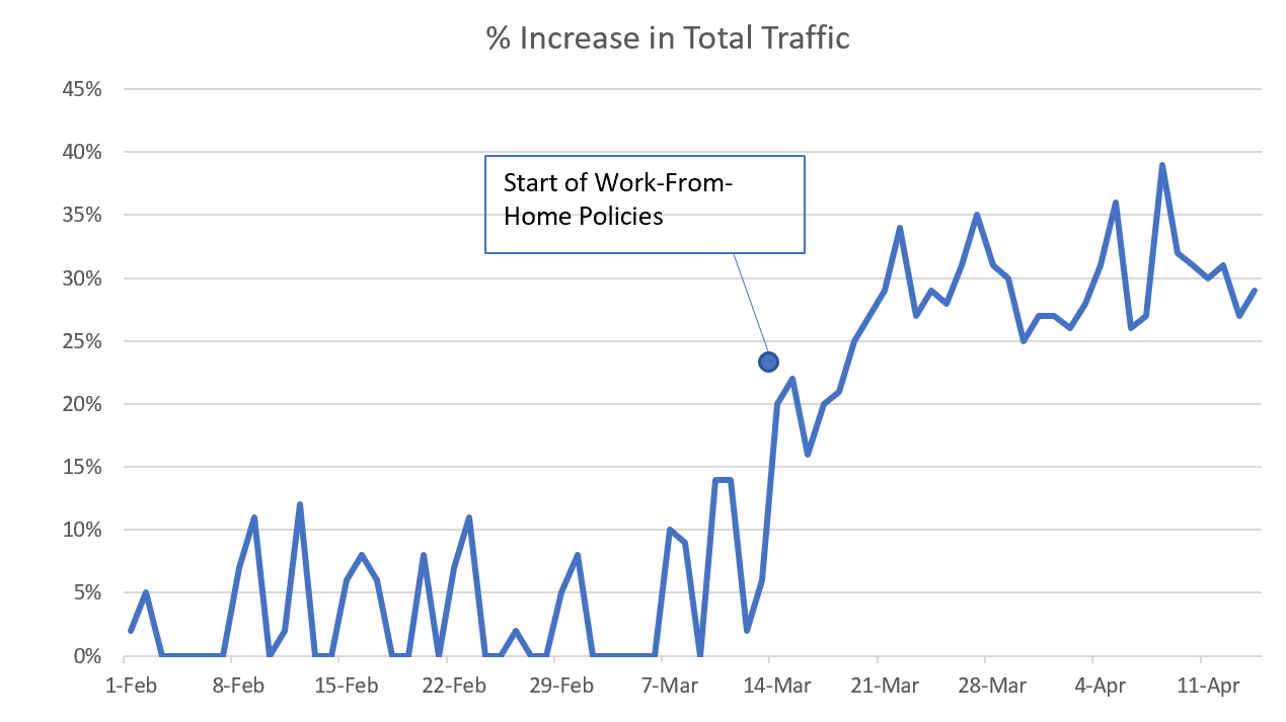 The chart above is from a specific US ISP, but is very indicative of other US ISPs. The US started implementing social distancing, remote work, and online learning policies in mid-March, which is clearly reflected in a network traffic spike that has been sustained throughout the lockdown period to date.

Similar trends occurred worldwide. For example, analyzing traffic from 20 ISPs in the Latin America region shows some startling numbers from the five countries with the largest growth percentage. Look at the growth in Mexico (73 percent) and Argentina (60 percent). 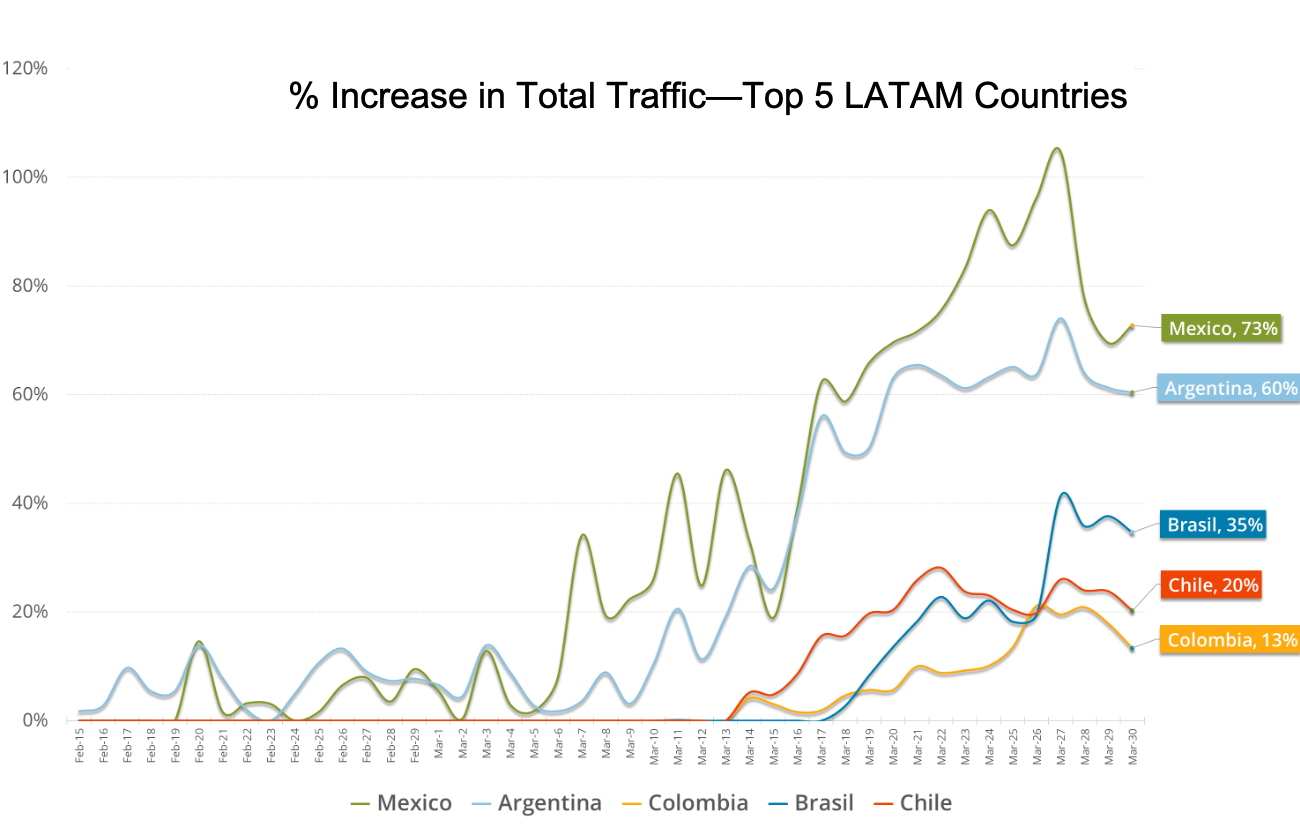 In the EMEA region, ISPs reported varying rates of traffic growth. As seen in the chart below, one ISP in Europe indicated a 35 percent increase in total traffic. 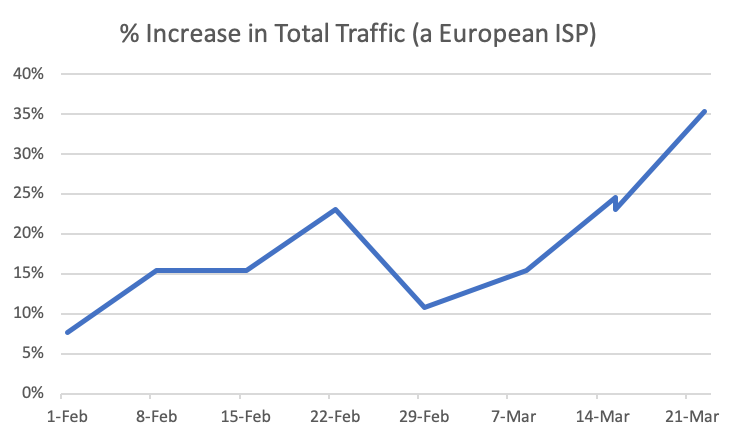 Other European ISPs, however, gave different anecdotal accounts. One reported “an average of 90 percent traffic growth based on traffic exiting our peering points,” while another said that “for internet and CDNs [content delivery networks], we have seen traffic-level increases of about 20 percent since the lockdown.” Other European ISPs cited values in the lower teens.

In the Asia Pacific region, three ISPs from China cited total traffic growth of 30 percent, 54 percent, and 80 percent, respectively, while a Japanese ISP told us that “traffic rapidly increased around 30 percent after February 1, 2020. In Thailand and Laos, the increase was in the 10 percent to 15 percent range.

Meanwhile, an ISP in Taiwan told us that it saw “no dramatic increase with steady traffic usage.” The ISP attributed this to the fact that Taiwan had not been on lockdown so far, and most people were still working normally.

And lastly, a South Korean ISP indicated that traffic increased by approximately 20 percent as the number of infections increased in late February. Then in late March, after the government implemented social distancing programs, this traffic dropped by 10 percent; nonetheless, this was 10 percent higher than in the beginning of February.

The next logical question is, “What makes up this traffic growth?” We’ll dig into those details, including some eye-popping numbers, in Part 2 of this series. A few hints: Video conferencing rules the work week, online gaming never stops, and people really want to support loved one in hard-hit areas.

Learn more about the Arbor Sightline solutions used to provide the insight in this blog.

Bienkowski is a director of product marketing at NETSCOUT.