This year’s report noted that the largest DDoS attack was 650 Gbps; which was down from the prior year of 800 Gbps.  The report also noted that though the largest DDoS attack was 650Gbps, the overall mix of attack sizes is still shifting up.  For example, this year the percentage of attacks over 1 Gbps has increased to 22%, growing three years in a row.

No sooner had the ink dried on WISR 2018 did we encounter a 1.7Tbps DDoS attack! 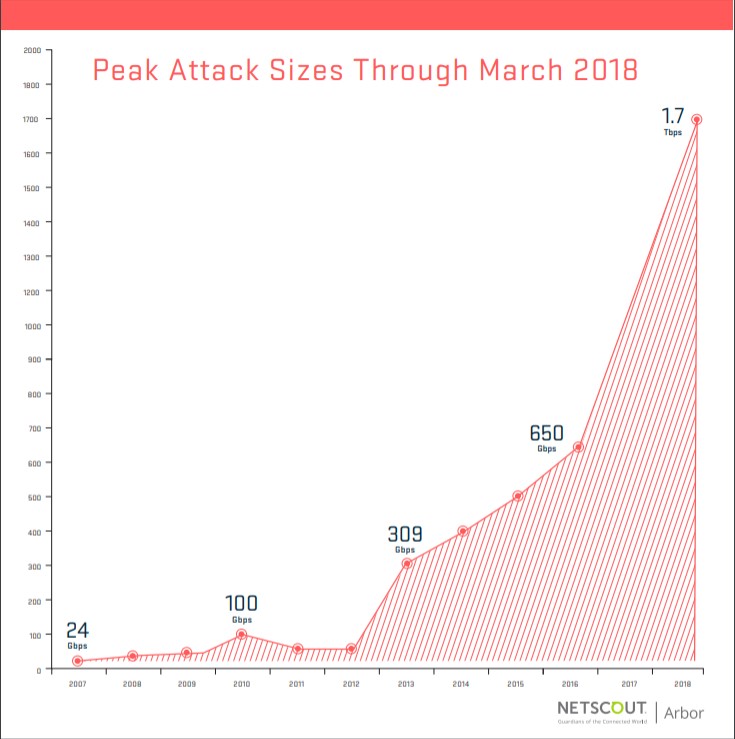 The attack utilized a Memcached (pronounced mem-cash-dee) Reflection & Amplification vector to accomplish such a massive attack.

Though Memcached reflection and amplification attacks are not new, the abrupt rise in the number and size of these attacks indicates the weaponization of this technique has occurred. In other words, now this technique is in the hands of less sophisticated attackers who now simply utilize a DDoS for Hire Boot Stresser service to launch such an attack.

How did the DDoS attack occur?

To learn more about the technical details of the Memcached Reflection and Amplification attacks and ways to stop them, visit our ASERT Blog:

And the modern day DDoS attack is complex as it deploys a dynamic combination of at least three different attack vectors.

First, volumetric attacks, like the memcached attacks which can reach Terabits in size, are designed to saturate bandwidth. According to Arbor’s WISR 2018, 52% of attacks are volumetric.

Second, TCP state exhaustion attacks are designed to take out your first lines of defense such as firewalls or IPS devices. According to Arbor’s WISR 2018, 16% of attacks are TCP State Exhaustion.

The attackers use all three of these attack vectors simultaneously, making it very difficult to defend against.

Best Practices to Stop These Kinds of Attacks

Industry best practices dictate, you need to take a layered or hybrid approach to stop multi-vector DDoS attacks. In other words…

Your only option is the cloud. You need the help of your Internet Service Provider or a cloud-based DDoS protection service provider to reroute attack traffic to their cloud based scrubbing centers.

The best option for protection is on your premises. That is, deploy DDoS protection in the most critical data centers.

Customize policies for applications running in those data centers.

And install in front of firewalls to protect them from TCP-state exhaustion attacks.

For more information on Memcached attacks, take a look at this video, What is a Memcached DDoS Attack? And How You Can Stop It