ASERT recently identified a campaign targeting commercial manufacturing  in the US and potentially Europe in late 2017.   The threat actors used phishing and downloader(s) to install a Remote Access Trojan (RAT) ASERT calls InnaputRAT on the target's machine.  The RAT contained a series of commands that includes machine profiling and the ability to exfiltrate documents from the victims’ machines. We believe this activity ties to a specific set of actors with defined campaign goals. We’ve also observed similarities in binaries dating back to 2016, a clear indication that these threat actors have operated for nearly two years. 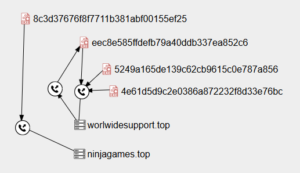 ASERT identified potential actors, or personas, tied to this campaign through domains registrations, Facebook, and Twitter accounts possibly tied to an email address used. We initially identified the campaign through several phishing attempts that led to additional infrastructure within the same campaign. This campaign shared a common malware payload, InnaputRAT. Some of the recent malware samples were attributed to the campaign through similarities in the binary rather than connected infrastructure. The phishing emails appear to lure victims with a geopolitical-theme.  Sender email addresses and subject lines often reference the United Nations (UN).  Further, while most of the domains associated with Aigul(Aygul) Akulova and Slabodan Miloshevich attempt to mimic Google or Microsoft products, a few of them were more specific in mimicking diplomacy related targets, notably un-booklet[.]com and us-embassy-report[.]com, suggesting a more specific audience. We identified the initial campaign through domains highlighted in the Phishing Domains section below. After analysis of the original infrastructure, we identified the InnaputRAT payload on additional infrastructure highlighted in the Additional Domains Section.

All of these domains are tied to the email address s.miloshevich[@]yandex.ru with the registration name Slabodan Miloshevich. Each of the domains used Kazakhstan as the registrant's country.  Additional domains registered by the same entity resolved to 4 distinct IP addresses (as of March 24. 2017). 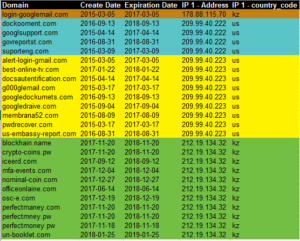 In the prior section we associated the first domain with s.miloshevich[@]yandex.ru.  The actor behind innaput69[@]gmail.com registered domains two and three.  All three domains hosted either a variant or the primary sample we analyzed, thus tying them together as part of the same activity. Looking at the domains registered by innaput69[@]gmail.com, the names on the account use the same last name but use two different first names.  Notice all but one list the registrant contact country as RU.

Figure 3: Domains tied to innaput69@gmail[.]com
To find officemicroupdate[.]com we must dig through some historical domain registrar information.  From March 1, 2017 – November 2, 2017 the registrant email was innaput69[@]gmail.com (according to Domain Tools) before the URL was taken over by Microsoft.  Prior to March 1st of 2017 the registrant info was hidden behind a Privacy Protected Record so it is possible it was registered at one time by someone other than the actor behind innaput69[@]gmail.com.

Pivoting off of the phone number for "Aygul A Akulova" in figure 3 we find another email address, jemesn[@]mail.ru.  This email address is tied to a couple of other domains as well. Figure 4: Registrant info for jemesn[@]mail.ru
One of the domains associated with jemesn[@]mail.ru, update-app[.]top, hosted a copy of Godzilla Loader which we observed distributing InnaputRAT late March 2018.

All of the infrastructure and registrants were tied together with a common malware payload, InnaputRAT. We identified a recent version of the InnaputRAT through the initial phishing campaigns, infastructure correlation, and binary analysis. We then found several variations of the malware dating back to 2016.  The binaries are listed below in chronological order. Our starting sample (5249a165de139c62cb9615c0e787a856) is listed as Sample 3 (below). We compared the binaries using Diaphora, an open source tool for comparing programs in a decompiler, and extracted relevant information showing the RAT’s evolution.

We believe this to be an earlier variant of for the following reasons:

While we believe this sample is from the same family as Samples 2 through 5 (below), there are some notable differences that suggest the malware evolved over time:

The key functionality of the payload remains the same across all binaries: browse the victim file system with the intent to exfiltrate desired data.

Performing a diffing operation using Diaphora, most of the functions in the binary matched, including “Command Options” and C2s used.  This provides an increased level of confidence that Sample 2 is a variant of the “ground zero” binary in Sample 3 (below). The key difference between later variants and Sample 1, involve the persistence mechanism used and a change in the Read File “Command Option”. Later variants no longer rely on the dropper to set persistence via Windows Service, but instead create the Windows Registry key as seen in Table 2 and execute the malware.

Sample 3, our starting sample , is a near exact match with Sample 2, but seen hosted on a different server.

The primary difference between Sample 2 and this sample is the file name used by the payload.  The prior version used the name SafeApp.exe and installed the binary into %AppData% and added a Windows auto run registry entry against that file.  Sample 3 does the same thing but makes the file name NeutralApp.exe. This is notable, because the malware checks for a copy of itself, and the name is static making it simple to identify infection.  Due to the name change, the newer version runs even if SafeApp.exe is currently running on the victim machine.

Continuing binary matching and infrastructure analysis, we found a fourth sample that showed more evolution of the binary by obfuscating some of the API names and strings. This binary also shared the same NeutralApp.exe file name and the same C2s as the prior variant. The “Command Options” also remained the same in this variant.

The PDB string contained in this fourth sample is identical to Sample 2, further lending credence to the evolution of the InnaputRAT.

This variant uses an 8-byte XOR key to obfuscate API names and other strings within the payload (Figure 5).

The most recent variant of the InnaputRAT also shared the same C2s as the previous two samples, the same NeutralApp.exe name, and the same Registry Key creation. At the time of our analysis of this sample, the payload was being distributed by Godzilla Loader (Figure 6), a tool sold in underground forums and used in multiple campaigns to distribute malware such as Dridex, Trickbot, and Panda Banker. Figure 6: GodZilla Loader Login Panel
Primary differences between this sample and the previous two are diminishing matched functions using Diaphora (likely a result of the attackers obfuscating more API calls and strings) and a change in the 8-Byte XOR key used to obfuscate the API names and other strings. 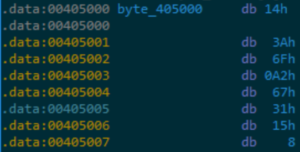 ASERT believes the attackers behind the InnaputRAT are primarily targeting files for exfiltration from victim machines. The initial targeting of commercial manufacturing entities possibly suggests a goal of intellectual property theft. Since 2016 the malware has undergone significant changes.  The attackers continue to improve the sophistication of the bot and its operation with the inclusion of an intermediary loader, Godzilla Loader, and obfuscation of key elements in the binary. We assess with moderate confidence that this operation will continue and the InnaputRAT will continue to evolve.

The activity described in this blog was derived from the ATLAS Intelligence Feed and original research by the ASERT Team. The indicators and signatures related to the activity enable Arbor APS to block the activity.